25 years ago I tried a pomegranate and it looked like a massacre in my kitchen, clearly I had no idea what it was or what I was doing . From then on I was done with the pomegranate.

However now that we eat clean and mostly plant based I wanted to give it a go again.

Thanks to modern technology and YouTube I learned how to cut and get the seeds out.

These little ruby red bursts of sweet and tart deliciousness that pack a seriously big punch of health benefits. I have missed out on all the health benefits far to long! That should come as no surprise, seeing as pomegranates are among the top 10 Bible foods that heal the body and the mind!

Pomegranates have even been shown to provide anticarcinogenic effects.

What about pomegranate nutrition?

Pomegranate seeds come from a pomegranate which is a fruit about the size of a large orange, obscurely six-sided, with a smooth, thick skin that ranges in color from brownish yellow to deep red. The inside of a pomegranate is a sight to behold separated by cream-colored membranes are chambers of hundreds of arils, which are the seed pods inside a pomegranate. These arils consist of juicy, brilliant-red fruit surrounding tiny, crisp, edible seeds.

These arils or seed pods are what we commonly refer to as “pomegranate seeds,” and they are eaten either raw or are processed into pomegranate juice.

Most people just eat the seeds or arils of a pomegranate. The juicy and nutritious seeds gust with flavor as you eat them, and one pomegranate can hold over 600 seeds! You can also eat the creamy white pithy part surrounding the seeds, but it’s quite bitter. Just in case you’re tempted to try to eat or juice the whole pomegranate (literally) you definitely don’t want to try to consume the tough outer skin.

Pomegranate seeds are also used to make pomegranate seed oil, which has many positive health effects both internally and externally.

Arthritis is an inflammation of one or more joints, causing pain and stiffness that can worsen with age. There are more than 3 million cases of arthritis in the U.S. each year. Pomegranates make the list for natural arthritis treatment….since they’re a source of antioxidants called flavonols, which act as anti-inflammatory agents in the body.

Animal testing demonstrates that pomegranate seed extract may reduce the onset and incidence of collagen-induced arthritis. Studies conducted with animal subjects also show that the severity of arthritis and joint inflammation were significantly reduced with consumption of pomegranate extract.

If you’re already on medication for arthritis, check with your doctor before adding pomegranate products to your daily routine.

When it comes to cancer, more and more research shows that pomegranate seeds are a potent cancer fighting food. Pomegranate has been shown to exert antitumor effects on various types of cancer cells.

Other studies have found that certain compounds in pomegranate juice show potent antitumorigenic effects and inhibited the growth of prostate cancer cells in the laboratory.

The juice of pomegranate seeds contains different types of antioxidants and bioactive polyphenols that have been reported to promote cardiovascular health, including healthy blood pressure levels, through several mechanisms.

A 2013 study concluded that consumption of pomegranate juice should be considered in the context of both dietary and pharmacological interventions for hypertension (high blood pressure). 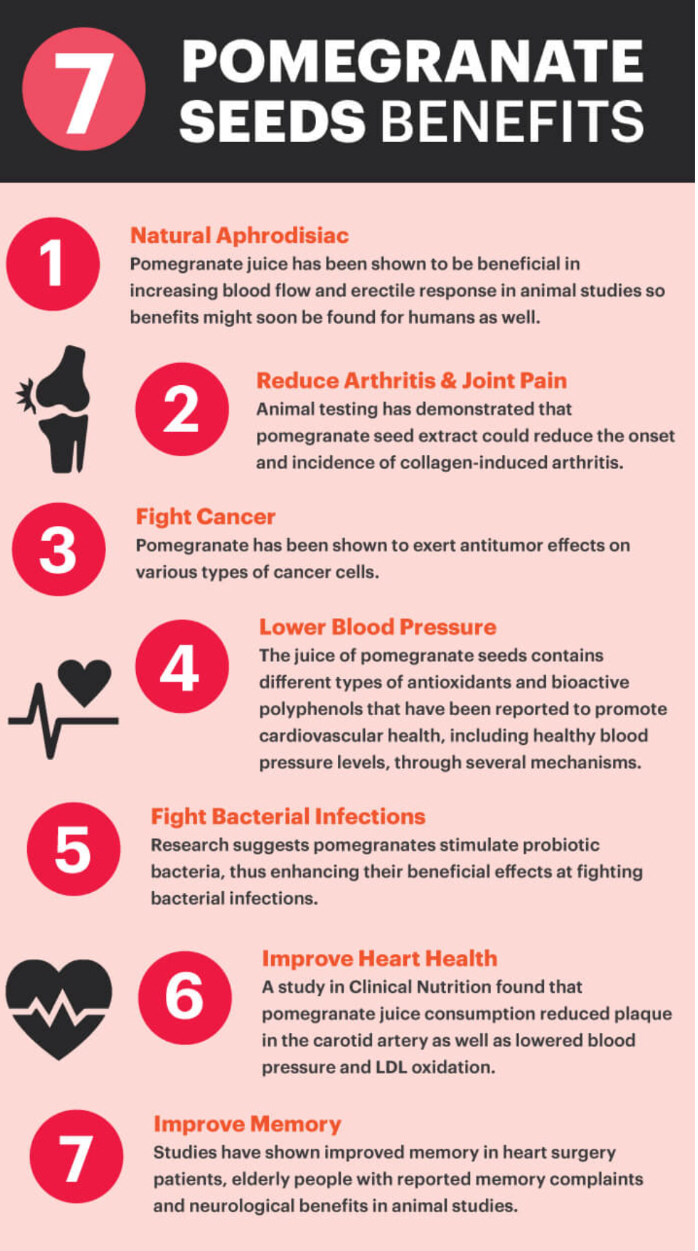