In a medium bowl, mash potatoes with salt and butter or run through potato ricer.

Add egg and mix until well combined. Sift in flour and knead until soft dough forms and it does not stick to your hands.

Cut dough into 8-10 equal pieces, depending on the size of your plums. With lightly floured hands, take a piece of dough and pat it flat. Place one plum in the center and bring sides of dough over plum; roll it between the hands until it’s sealed tight (moist your hands if necessary).

Optional: if plums are not quite ripe, place a sugar cube dipped in rum inside of each plum to increase the sweetness and flavor. In a large pot, bring salted water to a boil. Lower the heat to medium.

One at a time put dumplings into boiling water. Cook for 10-15 minutes. Dumplings are done when they rise to the top. In a large pan, heat oil over medium heat; add bread crumbs. Stir for a couple of minutes or until they darken just a bit.

Using a slotted spoon, add cooked dumplings to the breadcrumbs and roll them in the pan to coat completely. Transfer to a plate. In a small bowl combine the sugar and cinnamon.

Serve dumplings topped with a dollop of sour cream and sprinkled with sugar/cinnamon mixture. 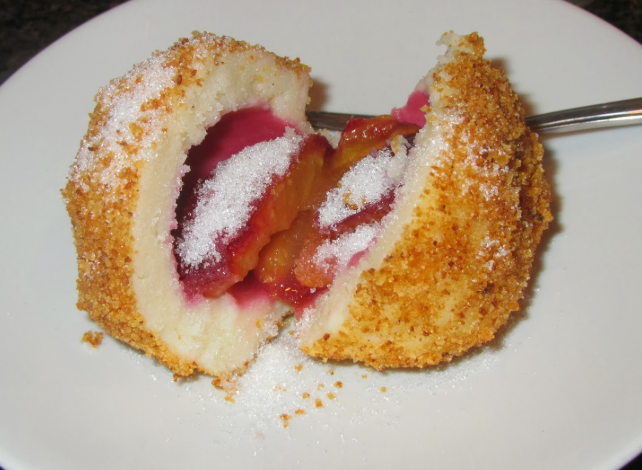 The Mihanović castle was built in the 18th century by the counts Erdödy, but it ended up as a security in the ownership of governor Josip Brigljević, the husband of the sister of the poet Antun Mihanović. The poet, who is the author of “Lijepa naša domovina” often stayed at the castle, which is why it was named after him. The castle was reconstructed and restored in 1983, and today it is a well known hospitality establishment for various festive occasions – from business conferences to fantasy weddings.