Osteocalcin, a hormone produced in the bones, could one day provide treatments for age-related issues such as muscle and memory loss. 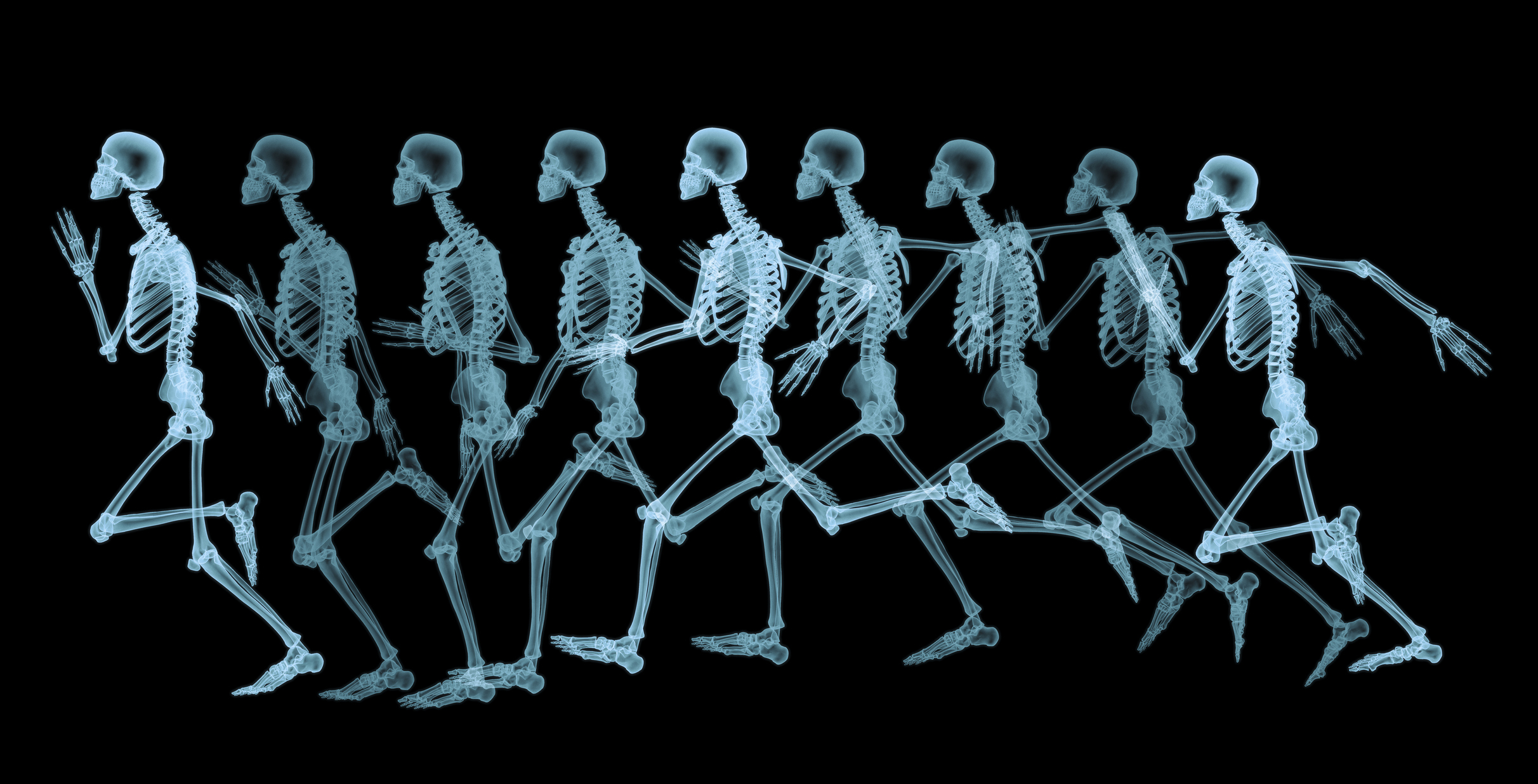 Bones are live organs, which play a role in regulating a range of bodily processes. Photograph: Doug Armand / Getty Images.

Gérard Karsenty was a young scientist trying to make a name for himself in the early 1990s when he first stumbled upon a finding that would go on to transform our understanding of bone, and the role it plays in our body.

Karsenty had become interested in osteocalcin, one of the most abundant proteins in bone. He suspected that it played a crucial role in bone remodelling – the process by which our bones continuously remove and create new tissue – which enables us to grow during childhood and adolescence, and also recover from injuries.

Intending to study this, he conducted a genetic knockout experiment, removing the gene responsible for osteocalcin from mice. However to his dismay, his mutant mice did not appear to have any obvious bone defects at all. “For him, it was initially a total failure,” says Mathieu Ferron, a former colleague of Karsenty who now heads a research lab studying bone biology at IRCM in Montreal. “In those days it was super-expensive to do modification in the mouse genome.”

But then Karsenty noticed something unexpected. While their bones had developed normally, the mice appeared to be both noticeably fat and cognitively impaired.

“Mice that don’t have osteocalcin have increased circulating glucose, and they tend to look a bit stupid,” says Ferron. “It may sound silly to say this, but they don’t learn very well, they appear kind of depressed. But it took Karsenty and his team some time to understand how a protein in bone could be affecting these functions. They were initially a bit surprised and terrified as it didn’t really make any sense to them.”

Almost 15 years later, Karsenty would publish the first of a series of landmark papers that would revolutionise our perspective on bone and the skeleton in general. We used to view our skeleton as primarily a mechanical structure whose main role is to serve as a scaffold for the rest of the body. But our bones are very much live organs, which we now believe play a role in regulating a whole range of vital bodily processes ranging from memory to appetite, muscle health, fertility, metabolism and many others.

“The idea that bone is just a simple organ that’s separated from everything else as a mineralised tissue, and that doesn’t communicate – that’s changed,” says Thomas Clemens, professor of orthopaedic surgery at the Johns Hopkins Center for Musculoskeletal Research. “Karsenty has ushered in the idea that bone is involved in communicating with other tissues in the body that wasn’t really understood or investigated before.”

We now know that bones communicate by participating in a network of signals to other organs through producing their own hormones, proteins that circulate in the blood. Karsenty’s mice eventually led him to realise that osteocalcin was in fact one such hormone, and understanding its links to regulating so many of these functions could have future implications in terms of public health interventions.

“The idea that bone could produce a hormone affecting metabolism or even your liver initially came as a bit of a shock,” says Ferron. “People did not expect that. But other scientists have since replicated the results, and even discovered new hormones also produced by bones. It’s opened up a completely new field in bone research.”

As we age, all of us inevitably lose bone. Research shows that humans reach peak bone mass in their 20s; from then onwards, it is a slow decline that can eventually lead to frailty and diseases such as osteoporosis in old age.

Over the past decade, new findings have suggested that this reduction in bone mass may also be linked to the weakening of muscles – referred to in medical terms as sarcopenia – as well as the memory and cognitive problems that many of us experience as we grow older. This appears to be connected to the levels of osteocalcin in the blood, through its role as a “master regulator”, influencing many other hormonal processes in the body.

“Osteocalcin acts in muscle to increase the ability to produce ATP, the fuel that allows us to exercise,” says Karsenty. “In the brain, it regulates the secretion of most neurotransmitters that are needed to have memory. The circulating levels of osteocalcin declines in humans around mid-life, which is roughly the time when these physiological functions, such as memory and the ability to exercise, begin to decline.”

But intriguingly in recent years, Karsenty has conducted a series of experiments in which he has shown that by increasing the levels of osteocalcin in older mice through injections, you can actually reverse many of these age-related ailments.

“Osteocalcin seems to be able to reverse manifestations of ageing in the brain and in muscle,” he says. “What is remarkable is that if you give osteocalcin to old mice, you restore memory and you restore the ability to exercise to the levels seen in a young mouse. That makes it potentially extremely attractive from a medical point of view.”

Scientists have also found that for humans, one way of naturally maintaining the levels of this hormone in the blood, even as we age, is through exercise, something that makes intuitive sense, as physical activity has long been known to have anti-ageing properties. Ferron is hoping that these findings can be used to support public health messages regarding the importance of staying active through middle age and later life.

“If you exercise regularly, then it stimulates your bone to make more osteocalcin, and that will have these beneficial effects on muscle and brain,” he says. “From epidemiological studies, we know that people who are very active tend to have less of a cognitive decline with age than sedentary people. With time, maybe people will be more aware of this connection, and think of their bone health as being just as important as other aspects of staying healthy.”

Ongoing research in this area also suggests that exercising more during the teenage years and early adulthood can continue to have a protective effect on bone and other aspects of health much later in life.

“I think this could reinforce the message that it’s important for people to be active during adolescence and early adult years,” Ferron says. “This means they reach a higher peak bone mass, which will protect them from age-related problems linked to osteocalcin decline.”

Osteocalcin is not the only bone hormone to have caught the attention of scientists, however. At the Mayo Clinic, Sundeep Khosla has been studying a hormone called DPP4, which is made by cells on the outer layers of bone, called osteoclasts, and appears to play a role in how bone regulates blood sugar.

Khosla is particularly interested in this hormone because the drug denosumab – which is clinically prescribed to osteoporosis patients to try and slow down the rate of bone loss – seems to have a positive effect on DPP4 as well. In a study of osteoporosis patients taking denosumab published earlier this year, he noticed that those also suffering from diabetes experienced an improvement in their symptoms.

“This shows that maybe this drug can treat both osteoporosis and diabetes at the same time,” says Khosla. “We’re now looking to follow up on these observations and test this through a randomised control trial.”

However, osteocalcin, with its potential to prevent many aspects of age-related decline, remains the major topic of interest in bone research. Given that so many people ignore public health guidelines regarding exercise – in 2017, the British Heart Foundation reported that around 20 million adults in the UK are insufficiently active – Karsenty is working on a means of artificially increasing the levels of osteocalcin in the blood and has even filed a patent on using it to treat cognitive disorders.

“This is not easy, but what we are hoping to do is to deliver osteocalcin perhaps through developing a molecule which regulates osteocalcin,” he says. “We’re exploring various ways of doing this, but the idea would be eventually to have something which could be used to treat age-related diseases such as sarcopenia and memory decline. This is really going to profit the elderly the most, but anyone with a decline in muscle function, because of a hip fracture or another condition, could also benefit from this treatment.”

Ferron says that such a treatment would differ from current medications designed to improve bone health in osteoporosis, as they only work by blocking bone loss. A drug targeting osteocalcin would aim to achieve wider health benefits through stimulating bone gain.

However, there are still plenty of hurdles to overcome. For example, simply injecting a form of osteocalcin is unlikely to be sufficient to achieve a therapeutic benefit in humans.

“Treatments like that tend to be more costly and more difficult as protein injections don’t have a very long half life,” says Ferron. “My lab is developing a stabilised form of osteocalcin so it can stay longer in the body, but the best solution would be to have some sort of small pharmacological molecules that could be put in a pill to target the receptor of osteocalcin to stimulate its activity. So that’s the idea I see for the future.”

But Karsenty’s findings have also led scientists to ponder a somewhat profound question: how did bones develop the ability to produce hormones such as osteocalcin in the first place?

The scientist himself believes that the answer lies deep in our evolutionary past. “I think that evolution has invented osteocalcin as a survival hormone,” he says. “Because to escape predators, you need your bones to be able to signal to your muscles to run, which is mediated by osteocalcin. To survive, you also need to remember where to find food or where a predator was an hour ago, and such memory processes are regulated by osteocalcin. More and more, we think that it evolved as a hormone to help animals escape danger.”

David Cox is a freelance health journalist and former neuroscientist.